When I first moved to Brooklyn to attend Pratt (in the 90s! AAAAAAH!) it was my secret ambition to infiltrate the comics world and transform Aquaman, that perennial laughing stock of superheroes and butt of now famous Entourage gags, into something really really cool.

Some background: Growing up I first encountered Aquaman with the 60s/70s "Superfriends" cartoon, wherein he was essentially a dude in an orange sweatshirt who telepathically talked marine life into doing his dirty work when it came to catching the bad guys. Later, (also in... the 90s! AAAAH!!!) Aquaman received a very much of the moment makeover, his blonde Eddie Cochran-esque greaser-doo replaced with unkempt grungey locks, a weird beard, and most offensively, a steam punk hook hand that he could shoot at his opponents. It was a disaster on all fronts.* However, at age 18, partly because I always root for the underdog and partly because I sensed a latent punky, rock n roll streak lurking in the character (see the Cochran coif), I decided to embark on a 4 year mission to train myself in the shadowy art of comics illustration and with little in the way of a solid plan or fixed vision, save Aquaman from himself and the stewards of his future.


I imagined a world where the classic cafeteria "Superman V. Batman" argument suddenly included their amphibious do-gooder brother in arms, the cool kids who were always sticking up for George Harrison** and John Cale now doing so clad in quasi-ironic faux vintage Aquaman t's. A real, actual, non-winking Aquaman film is made, launching a DC Cinematic Universe, years ahead of Marvel. Alfonso Cuaron, fresh off the surprisingly great Harry Potter And The Prisoner Of Azkaban, to say nothing of Y Tu Mama Tambien, directs with wit, and an understated humanity and vulnerability, building to an artsy-fartsy but cathartic climax. Guy Pierce stars in the lead role and predictably, Gary Oldman opposes him in the roll of Black Manta (60s/70s cartoon show nemesis with wacky voice). Chris Nolan's "Dark Knight" films suddenly look like small potatoes as the world watches and waits with baited breath for Aquaman 2: Atlantis Rising, especially once it's announced that Don DeLillo will contribute to the screen play and a not-yet-nutty Jaoquin Phoenix is attached, though his role won't be announced for months. I could go on...

...except that these dreams were dashed against the sudden and unpredictable rocks of my 19 year old attention span and the then-terrifying realization that my work would always be more successful when obliquely cribbing from Jasper Johns rather than Jack Kirby. C'est la vie, au revoir Aquaman.

A short short while back, my friend Ben King, late of PRINT, moonlighting over at Travel & Leisure called and asked if I'd be interested in doing a quick spot of 70s psychedelic hippie horror Swamp Thing, illustrating a tweet.

We live in a world of illustrated tweets. You and I, we can never go back. Dear art schools, I'm ready to get back at ya, Ted McGrath presents Illustration 302, "Introduction To Illustrating The Tweet." Get the ICON board on the line and hold it...

So Ben calls and asks for Swamp Thing. After rifling through some old sketchbooks to relearn "ick" from my early days on the circuit, I felt ready and kicked out some sketches. 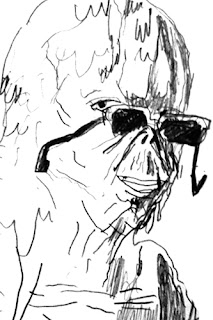 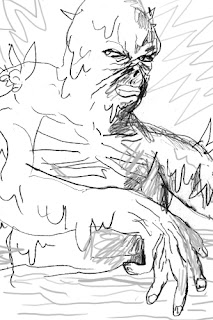 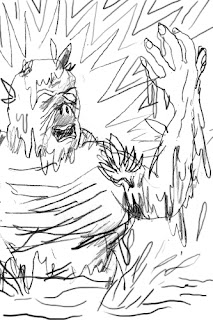 The tweet in question concerned a vigorously japing gentleman tumbling from an aqueduct and into the swampy water below, re-emerging in the guise of the "muck encrusted mockery of a man." I figured sheepish, Ray-Ban sporting ST would be the ticket, but ultimately we settled upon the Shakespearean over-reaction version in sketch #3. I furiously set about inking the beast... 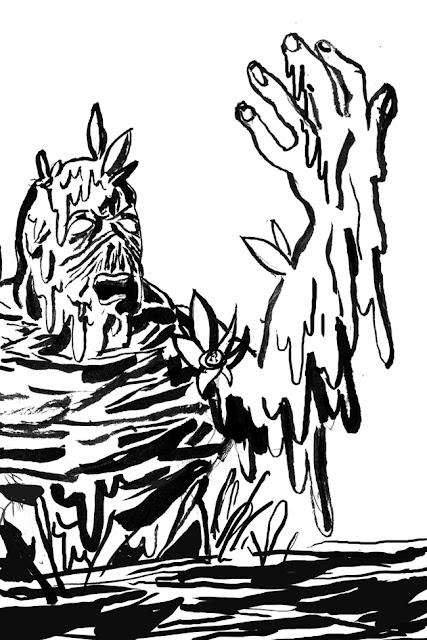 And made it this far before an editor returned from vacation and sent Swamp Thing, myself, Aquaman and the last shards of my 17 year old comics ambitions back to the bog, to dream the impossible dream once more.

Ah whatever, how about that Kanye record?

Thanks for reading, and thanks again to Ben for the fleeting glimpse of reconciliation between old man mellow career Ted and aggro weirdo young comics Ted. Werd.

*I'd love to see some sales figures on Aquaman comics from this era. Even as an ill-informed 14 year old who really cared about comics for the stories (really!), the whole thing just smacked of a Poochie-esque redesign by the marketing department.

**Martian Manhunter is the Ringo of the Justice League.

Students & Faculty: We Are Floating In Space

Last week I received a call from the New York Times Op-Ed page (especially exciting as it had been a minute since we worked together) with a typically thought provoking and challenging piece. A favorite client for almost 10 years now, I'm almost always incredibly pleased with the finals from Op-Ed gigs. Blissfully this one was no exception.

The article (penned by the fantastic Claire Vaye Watkins, look her up) dealt with the issue of dwindling opportunities beyond high school for rural midwestern students: slighted by the standardized test bureaucracy and all but ignored by prestigious coastal schools, these students often take on enormous loan debt, turn to a salivating military thirsty for new recruits or simply self-short change their dreams and ambitions altogether. Though the writing was by turns poignant and humorous, the passages concerning the aggressive and almost greedy military recruitment practices were especially striking and seemed ripe with bold and graphic imagery. I produced the following sketches: 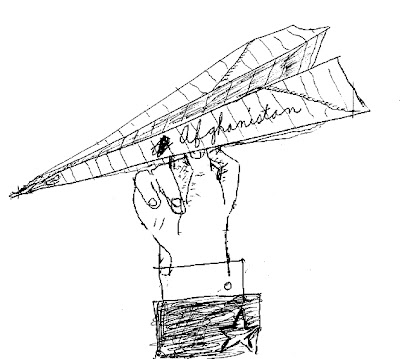 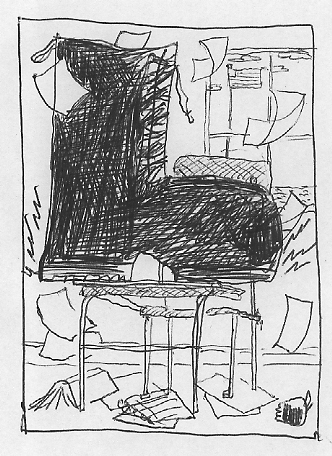 Though I believed the boot-on-desk sketch could be read as either specifically military related or taken as a more general metaphor for the trampled opportunities of these students, both editor and art director wanted something with a lighter touch that dealt with the remoteness and isolation of these schools. Also the headline had been added by this point, "The Ivy League Was Another Planet." Aha. Cue up Shatner, or you know what, and better yet,  Sir Patrick Stewart. There I said it. High school boldly going where etc etc... - engage (ugh)! 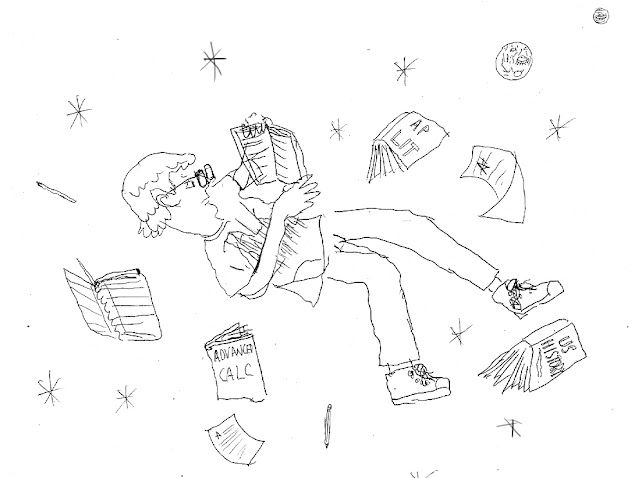 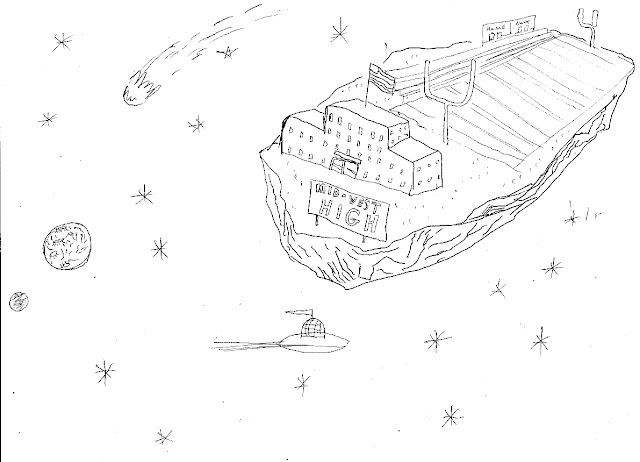 A quick gender flip for the student (credit where due: a subtle but inspired bit of art direction from Matt Dorfman), and voila, one of my favorite finishes to date for 2013: 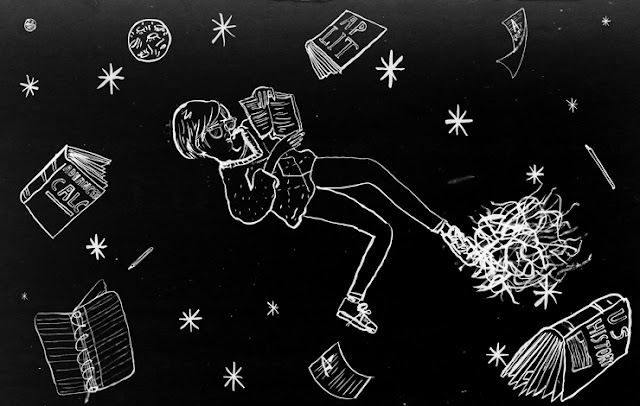 Thanks to Matt Dorfman and the rest of the gang at the Op-Ed desk for the typically engrossing assignment, and as always, thanks for reading!

Posted by ted mcgrath at 9:48 AM No comments: 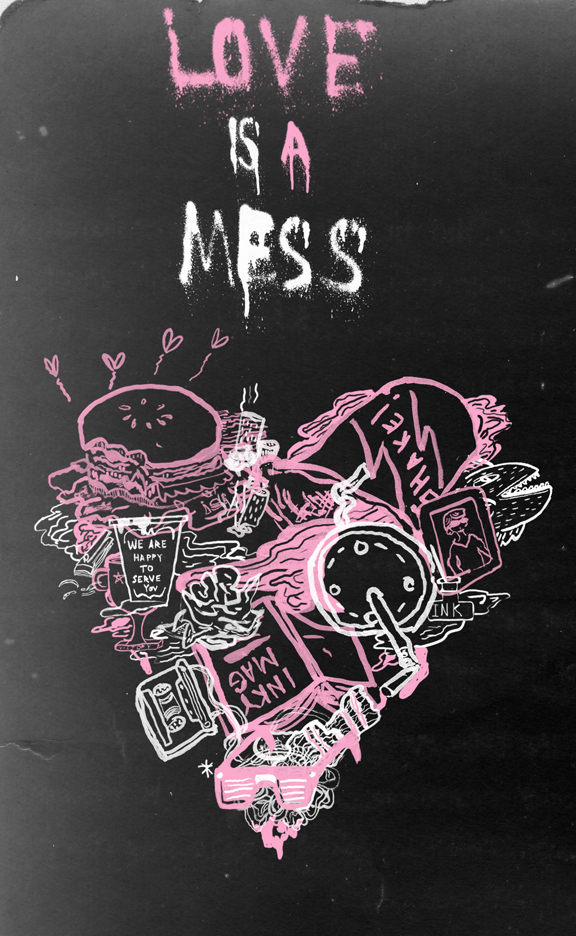 Posted by ted mcgrath at 7:50 AM No comments: